I remember when I first became interested in how turntables actually play records and how I was struggling to understand some of the technical terms written in manuals and magazines and how they are all interrelated.

I soon realised that Entry to Mid priced turntables only allow a certain amount of tonearm and cartridge alignment where as the higher end models allow finer adjustment of some if not all the various alignment settings.

There are many websites to choose from for additional information with regard to this subject but hopefully the text and diagrams we have provided will help you understand more. 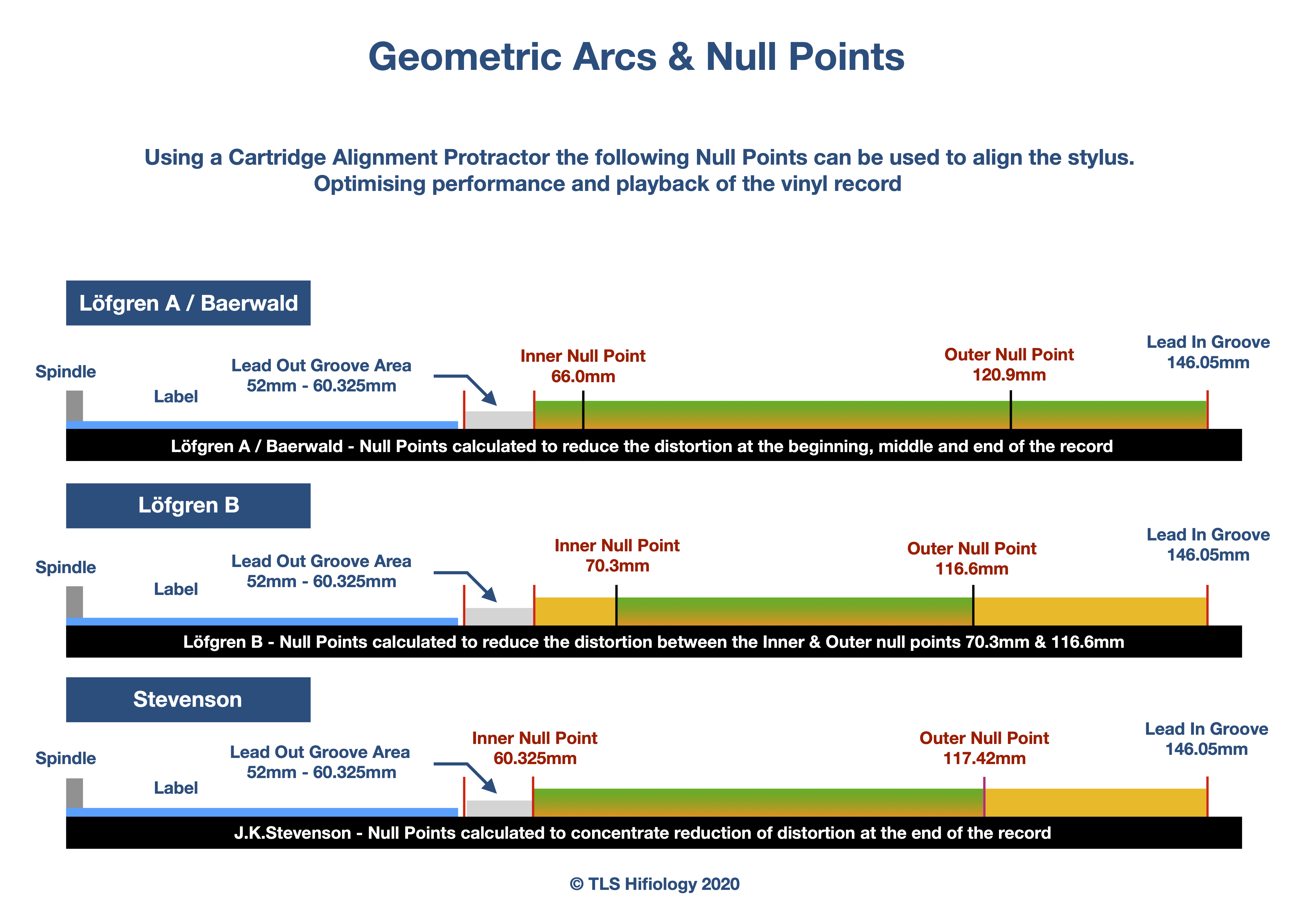 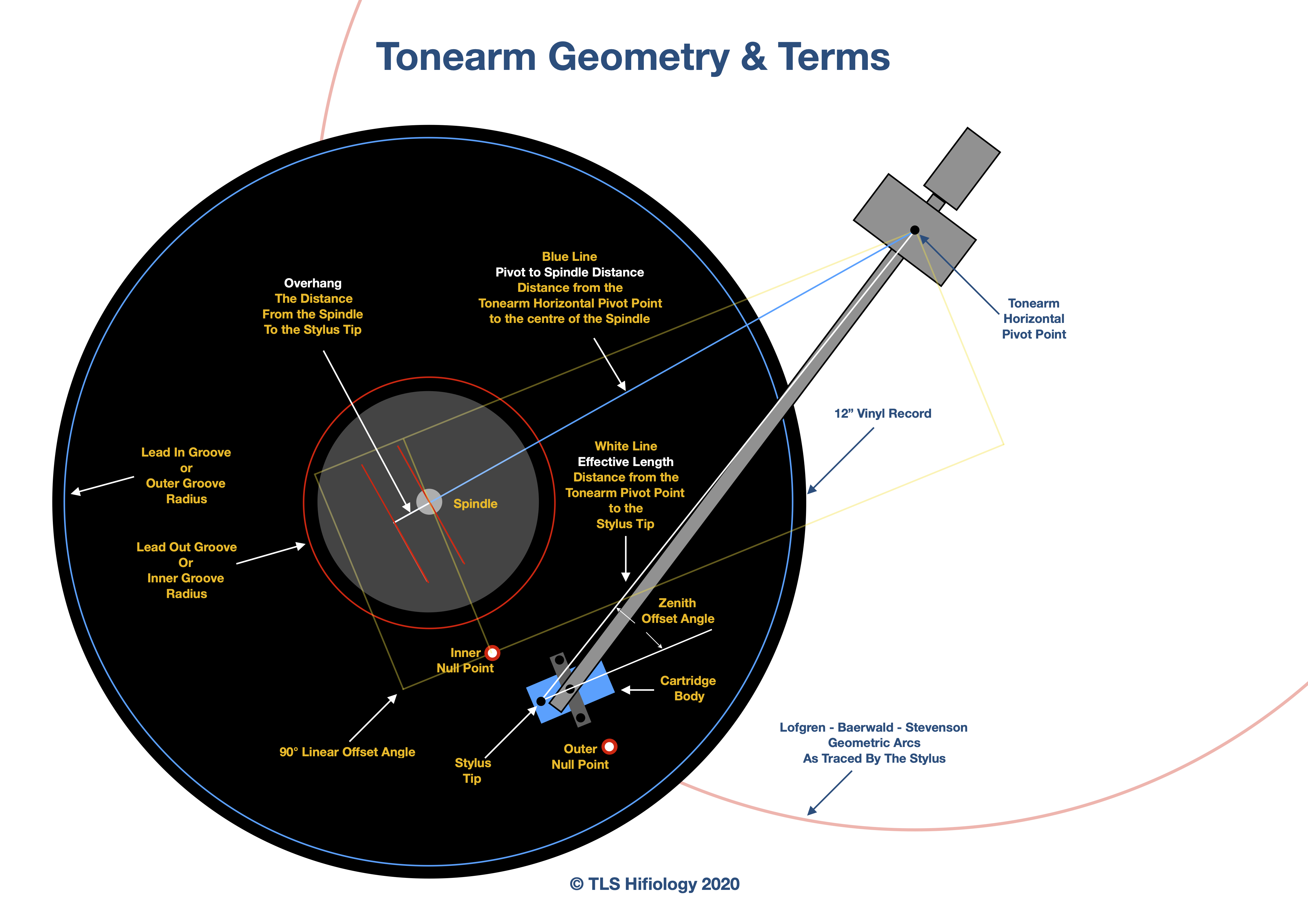 Note: Please reference the following text to the above diagrams.

The cutting head on a vinyl cutting lathe cuts at 90 degrees to the groove, that is traveling straight across the lacquer disc as it cuts the groove. Styli attached to pivoted tonearms travel across the vinyl disc in a geometric arc, as a result there is what’s called a Tangential or Zero Tracking Error.

The original pioneer and inventor of modern tonearm and cartridge alignment geometry, was Professor Erik Löfgren of the Royal Institute of Technology, Stockholm, Sweden. In 1938 he first published his Löfgren A and B mathematical calculations presented as geometrical arcs to reduce lateral tracking error (LTE) and minimise the lateral tracking error distortion (LTED) caused when a stylus is not tracking the record groove precisely at 90 degrees using a pivoted tone arm.

There are two points along these geometric arcs called the Inner & Outer Null Points. It’s at these null points that the stylus can be adjusted to track at 90 degrees to the groove. The outer grooves of the record present the best sounding position on the disc but as the stylus travels across the disc the sound deteriorates as the stylus enters the inner grooves of the disc, hence why louder tracks are positioned during the record cutting process at the beginning of a record and quieter tracks at the end of play.

Using a Cartridge Alignment Protractor the following Null Points can be used to align the stylus.

Löfgren A / Baerwald - (Most Popular and Frequently Used)

The Null points where calculated to reduce the lateral tracking error distortion at the beginning, middle and end of the record.

The null points are Inner 66.0mm and Outer 120.9mm as measured from the centre of the record.

The Null Points where calculated to reduce the lateral tracking error distortion between the Inner & Outer null points 70.3mm & 116.6mm, concentrating on the reduction of the distortion in the central area of the record.

The null points are Inner 70.3mm and Outer 116.6mm as measured from the centre of the record.

Stevenson calculated his null point positions to try and reduce the lateral tracking error distortion from just before the middle to the end of the record.

The null points are Inner 60.325mm and Outer 117.2mm as measured from the centre of the record.

Based upon the LP-manufacturing standards set by the International Electrotechnical Commission, The Löfgren A and Löfgren B (IEC) Inner Null Point is 60.325mm

Using the LP-manufacturing standards set by the German Institute for Standardisation, The Löfgren A (DIN), & Löfgren B (DIN) Inner Null Point is 57.5mm

Along with the use of the null points and cartridge alignment protractor the following settings are also interrelated to alignment of the Tonearm - Cartridge & Stylus.

The distance between the Tonearms Horizontal Pivot Point to the Centre of the Turntables Platter and Spindle based upon the mounting position of the tone arm.

The distance between the Tonearms Horizontal Pivot Point to the Stylus tip.

The distance from the centre of the spindle to the Stylus tip.

The angle of the stylus within the groove (90°) as set using the null points on a cartridge alignment protractor.

The 90° Linear Offset angle is determined when the stylus is aligned to the correct Effective Length and Zenith / Offset Angle at the Inner & Outer Null Points.