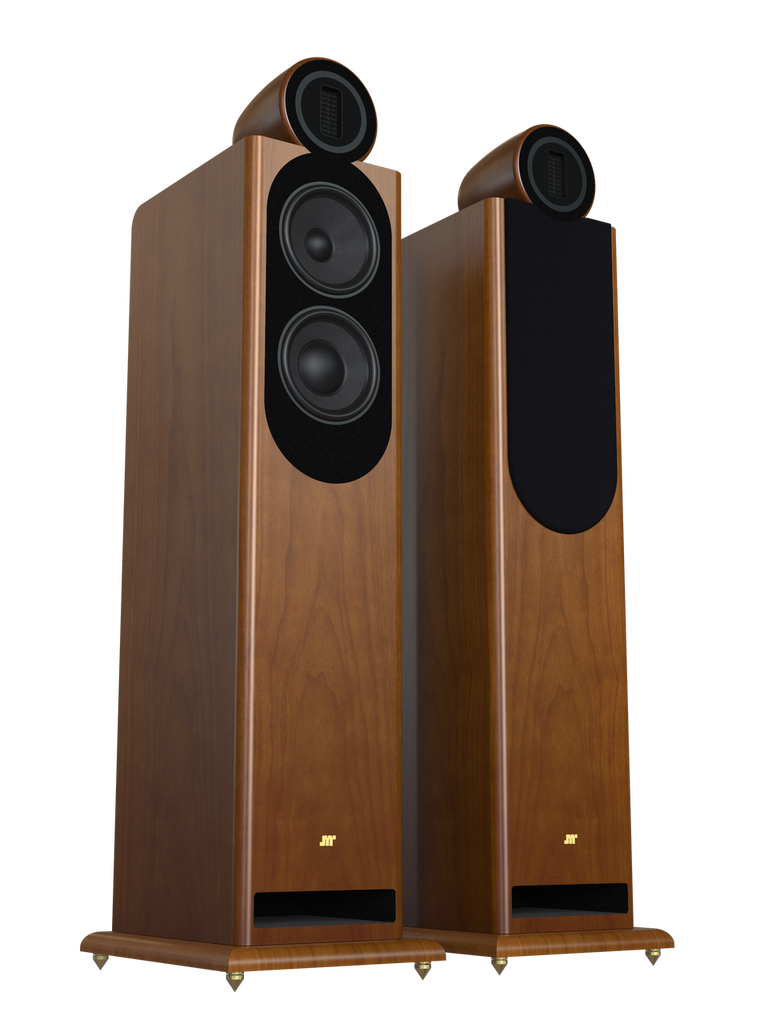 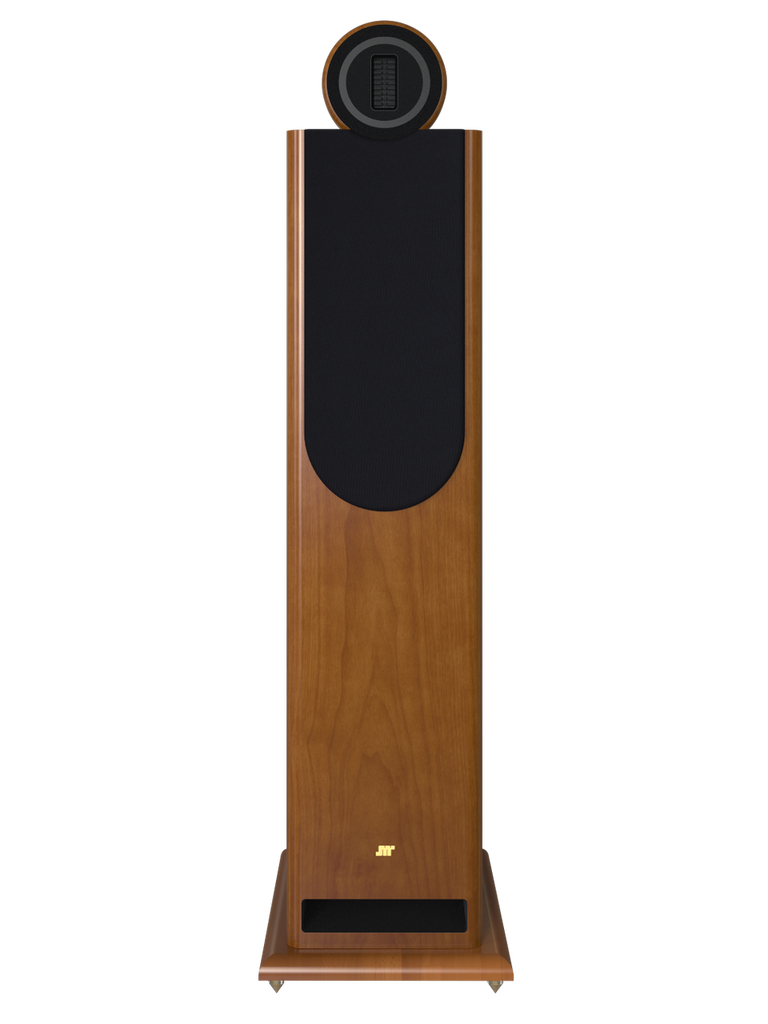 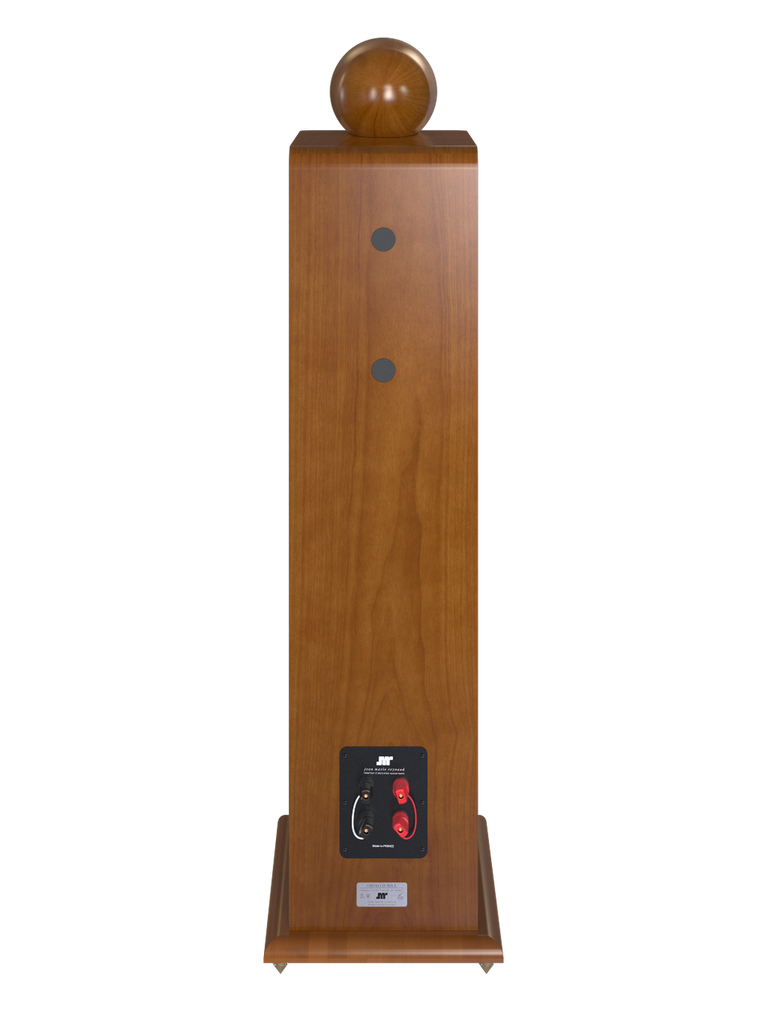 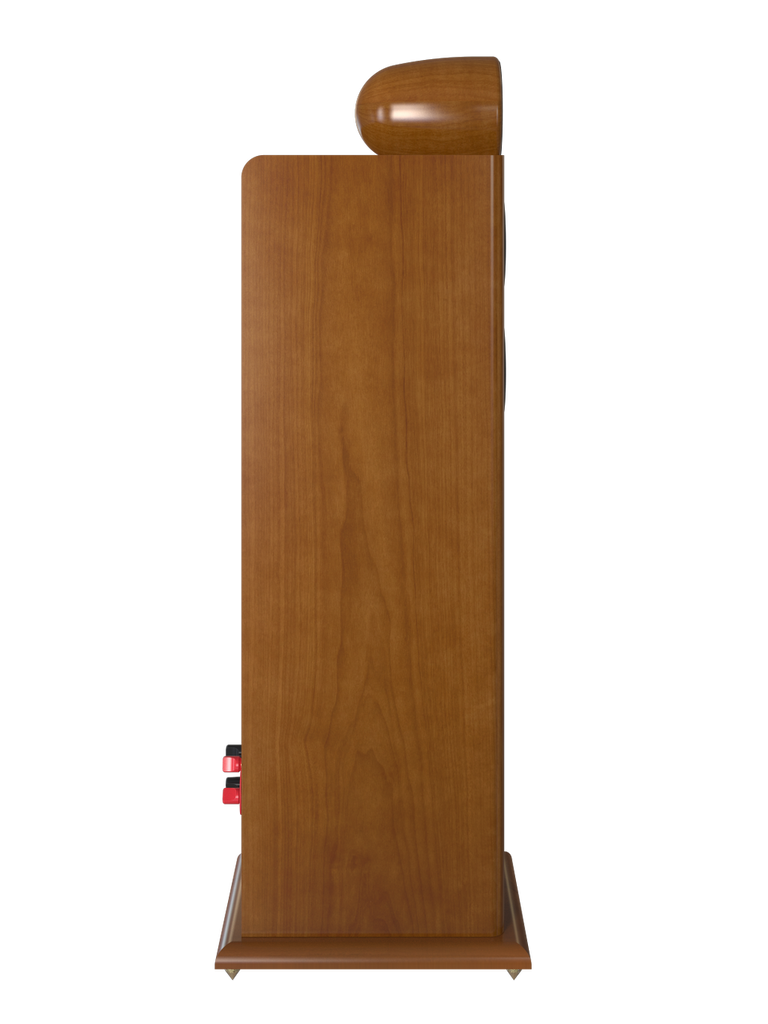 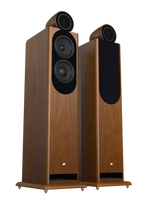 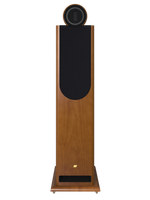 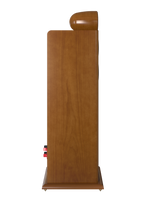 The Orfeo Jubile is the quintessential JMR loudspeaker. A relatively compact, high-performance 2.5-way loudspeaker with musical tonality as expected from JMR. All technical elements have been reviewed: loading principle, drivers, crossover network and even its aesthetic. Its silhouette is typical of all Jubile speakers. The Orfeo Jublie is easy to drive. That said, it requires electronics of excellent sonic character in order to reveal both its liveliness and impressive dynamic capacities. The cabinetwork sits on a base which is itself decoupled by a viscoelastic compound joint and placed on adjustable spikes. Quite simply these speakers are stunning.

SPECIFICATIONS
Acoustic Enclosure: This new version of JMR's triangular transmission line allows the use of practically no damping material in the line itself: only the partition wall is covered by a thin acoustic foam, and a crown of cellular foam acts as acoustic diode at the back of the cones of the drivers; no damping material impedes the air flow in the loading. Thus, the signal propagation speed in the line is much faster and the group delay of the system is greatly improved. In order to better control the vibratory phenomena  a large part of the internal surfaces of the cabinetwork are lined with bitumen and viscoelastic compound positioned experimentally at strategic points. The tweeter is housed in a solid turned piece of wood that has been decoupled from the upper surface of the cabinet using a bitumen joint and fixed with specific silent block. The entire cabinetwork sits on a base which is itself decoupled by a viscoelastic compound joint and placed on adjustable spikes.
Woofer: The Orfeo uses two new 180mm drivers developed in collaboration with a German company that JMR had already collaborated with in the development of the Cantabile Jubilee tweeter. It took almost a year and a half of development and several prototypes to finalise the design of these extremely powerful drivers. The cone consists of 7 layers of carbon fibre and PEEK (PolyEther Ether Ketone). The layering process is a particularly long and complex one, because each layer must be produced with a very precise drying time to allow the structure to be as uniform as possible. The cone receives an additional granular plasma treatment giving it a rough appearance on its external surface this prevents stationary wave formation on the surface of the cone. The results of this time consuming process is a cone that is very light in weight but exhibits strength and rigidity plus excellent internal dampening properties. The cone of a loudspeaker is a clever balance between rigidity and internal damping capacity to avoid resonances specific to the materials used to manufacture the cone.

This cone operates using a 37mm voice coil with a 16mm long winding of two layers with a ventilated glass fibre support, the surface of the support has been acoustically treated in order to absorb the peek of its natural resonant frequency. A ring of plasma-treated material is placed on the coil carrier field to prevent the coil carrier material from acoustically manifesting itself. The air gap has a pure copper ring to linearise the impedance of the driver at the end of the band to reduce its distortion by improving the concentration of magnetic flux around the coil. Its spider is aired and has a progressive profile in order to allow a displacement with a constant feedback force whatever the amplitude of its displacement. The woofer has two 100mm ferrite magnets with two control rings which when combined produce very strong magnetic field. The NBR rubber suspensions have an optimised profile in order to obtain a very fast response time when subjected to extreme variations in the low and mid frequencies.

Its basket is made of aluminium and opens the back face of the cone. Its core is pierced but receives a damping treatment consisting of several oriented microphonic felt discs. A fabric dome dust cap impregnated with a specific treatment on its inner side covers the coil, it is glued to the cone using a latex-based glue. Mechanical tensioning of the woofer is provided by a threaded rod made of non magnetic stainless steel which passes from the rear of cabinet and is attached to the rear of the woofer. This axial attachment of the woofer makes it possible to strengthen the rigidity of the cabinet and ensure mechanical forces are uniformly distributed between the loudspeaker basket and the supporting cabinet, dramatically improving the transient response of the speaker.

Tweeter: The Orfeo uses an Aurum Cantus, ATS - Aero Striction Ribbon Tweeter which is extremely natural sounding. It consists of a pleated diaphragm 25mm wide by 60mm high, whose silicone support is covered with a very fine film of extremely light, low-mass avionics type aluminium, that is carefully folded and surrounded by two very strong neodymium magnets which produce a highly saturated magnetic field. It is partially covered with a very fine acoustic foam in order to control first reflections around its diaphragm and to limit off axis phasing. Unlike a traditional ribbon tweeter which pushes the air in front of it, the Aero Striction tweeter pinches the air between its folds and expels it with a velocity far greater than a traditional ribbon tweeter, making it much faster and above all much less fragile, offering very high-power handling and a distortion rate far lower than that of any other ribbon diaphragm. Its linear frequency response and low horizontal directivity offers exceptional performance in the higher frequency range.

Crossover: 2.5 way configuration, The slopes are 6db / octave at 400hz and 12db At 3500hz. The bass / midrange and tweeter crossover units are separated and acoustically shielded from each other in order to avoid intermodulation of the components as much as possible. All of the components are hand crafted and are measured, matched and sorted into pairs to within a tolerance of 1%, thus the filter components have perfectly identical values on each of the matched speaker pair.

Capacitors: Silver armature capacitors which indicate the directivity of their silver foil windings are used and manufactured using JMRs specifications by a French company S.C.R

Coils: The coils are made of large sized pure copper foils wound around a solid wood core and encapsulated in wax to prevent intermodulating radiation. These coils offer an extremely low distortion rate, low internal resistance and very high power-holding capacities. They are orientated to each other to avoid unwanted radiation, resulting in a very full bass, with density, substance and great dynamics. They are used on the bass and mid drivers plus the tweeter.

Resistors: The resistors used for equalising the tweeter are of the highest quality, wound and surrounded by copper tubing connected to ground and encased in an inert resin. The copper tubing acts as a type of Faraday cage eliminating electromagnetic interference along with the added benefit of being an excellent heat dissipator. Using these resistors, the distortion rate is low, the high frequency is smooth and extremely dynamic. Conventional resistors tend to heat up enormously when confronted with large levels of variation resulting in distortion.

Hand Assembly: All the filters are assembled entirely by hand, without the use of a printed circuit board, the components are soldered directly to each other using silver ROHS (Reduction of Hazardous Substances)solder and are bonded using a flexible adhesive on Forex plates which isolate the components from any magnetic and vibratory interference.

Internal Wiring: All internal wiring is done with JMRs HP1132 silver/copper cable cable whose cross-section is doubled for the midrange and low-end. This high end cable provides a true linear response over the entire frequency range of the speaker. It produces rich tones with an extremely high degree of resolution and transparency that lacks any harshness. The speakers are wired using high-quality pure copper Mundorf terminals, which are attached to an aluminium plate, dampened using bitumen. The cables are connected to the passive filter using pure copper Mundorf lugs.

Sorry, there are no reviews for this product yet.