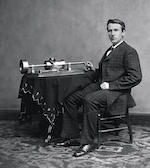 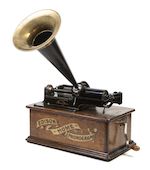 1925 - Microphones replace the use of horns, greatly improving the process of recording sound.

The lacquer discs had a limited use as they could only be used once, any mistakes during the recording and the recording process begins all over again. 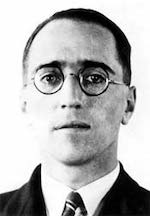 The company's first tape recorder, the Ampex Model 200, was first shipped in April 1948. During the 1950s 2-track tape recording became the norm for either mono or stereo recordings.

Binaural Stereo recordings using 2 microphones or recordings using multiple microphones mixed together for 2 channel using a mixing console where mainly used to record classical music in Stereo, whereas popular and jazz recordings where recorded in mono until the late 1960s. With the introduction of tape machines the use of lacquer discs and a stylus cutter ceased, but still sound recording artists had to perform and record all at the same time, due to the fact that tape machines only had 2 channels and these channels could not be individually placed into record, very similar to a cassette tape recorder.

Recordings could only be recorded in mono and later in 2 channel stereo. 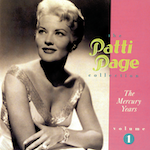 The artist Pattie Page was the first singer to overdub or multitrack her vocals on a song called, ‘Confess’. The song was recorded and engineered by Bill Putnam at Mercury Records and features the swing jazz guitarist George Warren Barnes who played the first electric guitar in 1931, he is said to have made the first commercial recording of an electric guitar on March 1, 1938.

The first recording artists to use a custom-built eight-track recorder from Ampex nicknamed the “Octopus" was the guitarist, composer and technician Les Paul and his singing wife, Iris Colleen Summers who’s stage name was Mary Ford. The name “Octopus" was inspired by comedian W.C. Fields who after listening to Les Pauls recordings said “My boy, you sound like an octopus”. Multitrack recording enabled recording engineers to record each musical instrument and vocals separately. Engineers could now adjust the level and tone of each recorded instrument or vocal. Reverb and other effects could now be applied to individual tracks. Lead vocals could be recorded separately and harmony vocals overdubbed later.

Also introduced in the early 1950s where 3 track tape machines.

These machines enabled the sound engineer to record the backing tracks onto two tracks either as separate backing tracks 1 and 2 or a Stereo Left and Right mix with the additional third track being used to record the lead instrument or lead vocal. Three-track recorders remained in widespread commercial use until the mid-1960s. 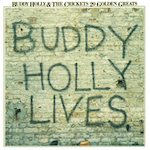 Buddy Holly along with the Dick Jacobs Orchestra recorded the song ‘True Love Ways’ at the Pythian Temple in New York City on October 21st, 1958. In the first ten seconds of the extended version of the song featured on the album, ‘Buddy Holly Lives’ the following can be heard:

The producer says "Pitch, Ernie", (Left Channel) to signal the piano player to give Holly his starting note, a B-flat. (Right Channel)

but the Left and Right channels are reversed. (Note to Mastering Engineer) 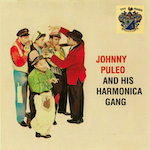 by the artist, Johnny Puleo and his Harmonica Gang on the New York based, Audio Fidelity Record Label (AFSD 5830). 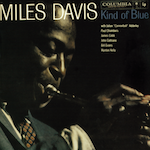 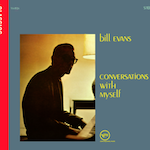 This recording demonstrates the early adaptation of the overdubbing or multitracking technique.

The listener can hear 3 piano performances positioned as follows, 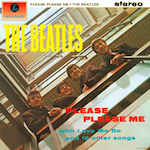 This recording features the Drums, Bass Guitar and Lead Guitar panned to the Left Speaker

and the Lead Vocals and Harmony Vocals panned to the Right speaker. 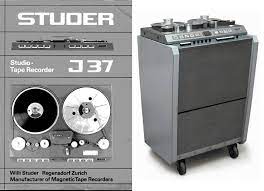 The Studer J37s were used on almost every recording until 8-track machines were introduced to Abbey Road Studios in 1969.

All of the Beatles mid-1960s recordings, including the most famous album ‘Sgt Pepper’s Lonely Hearts Club Band’

Prior to the 1950s the general public had mainly been listening to recordings in Mono using one speaker.

Following the introduction of the 33 1/3 Stereo LP record in 1956, two speakers where now required.

Popular at the time plus an item of household furniture where large wooden cabinets called Radiograms or Stereograms which combined a radio and gramophone / vinyl record player. These units featured valve electronics plus an internally housed large Mono speaker or pair of speakers for stereo reproduction. With the introduction of the transistor these units started to be slowly replaced with separate hifi components and separate left and right speakers. As the speakers in the Stereogram where positioned at a fixed distance apart within the Stereogram, the stereo soundstage was greatly reduced with very little separation of the left and right channels. I believe this is why certain recordings at the time such as the Beatles ‘Please Please Me’ was mixed featuring the Drums, Bass Guitar and Lead Guitar coming from the Left Speaker and the Lead Vocals and Harmony Vocals coming from the Right speaker. Remember it’s 1963 and Stereo playback is still in its infancy, so hearing the drums on the left and the vocals on the right would have been very new and exciting for the listener at the time. With the introduction of separate Left and Right speakers in the late 1960s early 70s, Hifi enthusiasts began to experiment with the positioning of their speakers in their homes. Terms like Soundstage, Depth, Width, Height, Toeing in,Toeing out and the infamous positioning triangle are born.

Stereo would never be the same again.

Stereo was invented and patented by Alan Blumlein in 1931.

Stereo provides the listener, the illusion or sense of listening to sound sources positioned to our Left, directly in front of us, to our Right and anywhere between Left and Right. The first mass-produced commercially available 12” Stereophonic long-playing record was released in March 1958 by the artist, Johnny Puleo and his Harmonica Gang on the New York based, Audio Fidelity Record Label (AFSD 5830).

Imagine yourself seated centrally in the front row seats of a theatre looking at the stage.

There are 3 musicians on stage in front of you, the first musician is positioned to the extreme left of the stage playing acoustic guitar, the second musician is the singer positioned in the centre of the stage directly in front of you with the third musician playing electric guitar positioned to your extreme right. Now close your eyes and imagine the 1st musician playing to your left, the 2nd musician singing directly in front of you and lastly the 3rd musician playing to your right. The positioning of the musicians on this imaginary stage have created what can be described as a Left, Centre, Right sound stage. Your hifi replicates this imaginary sound stage as an electronic sound stage, the Left speaker representing the position of the 1st musician and what’s known as a Phantom Centre channel representing the position of the 2nd musician and the Right speaker representing the position of the 3rd musician.

The Phantom Centre or Central position is created electronically during the recording and mixing process. One of the features available to the studio sound engineer when using a recording mixing console is the Pan Control. The Pan Control allows the mix engineer to position a recorded sound at various positions between the Left and Right speakers. For example to our Left, directly in front of us (Centre), to our Right or anywhere between the Left, Centre, Right sound stage.

The Panning positions can be as follows: (See the images below)

The Pan control also allows the engineer to separate the recorded sounds so that they don’t mask each other, improving definition and separation within the stereo sound stage. When the Pan Control is centrally positioned, an equal amount of electrical signal is sent to both the Left and Right channels and as a result, the recorded vocal for example, appears to the listener to be centrally positioned between the Left and Right speakers, when the listeners listening position is centred between the two speakers. 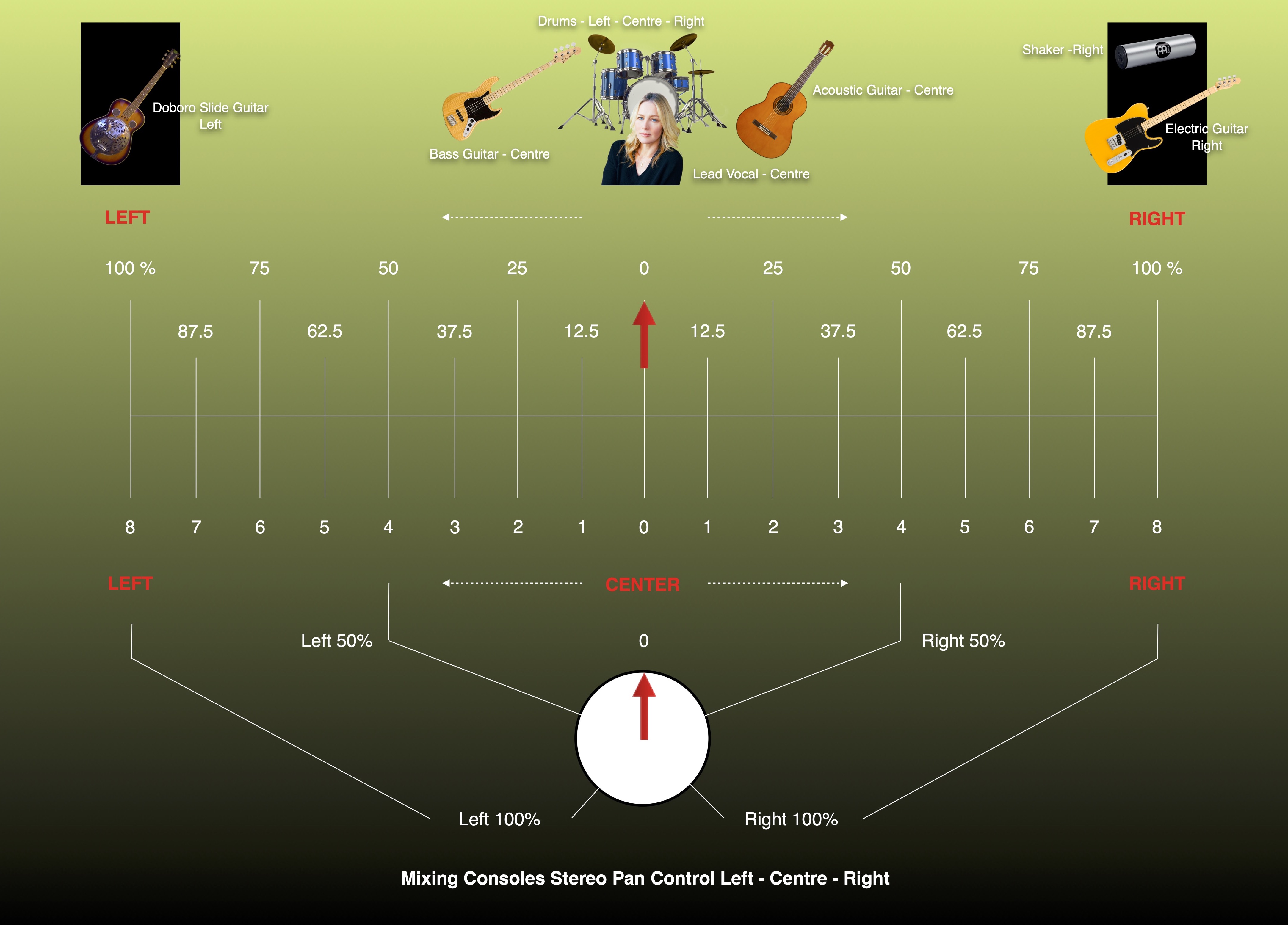 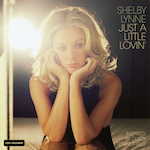 This recording demonstrates the modern form of Stereo Sound Stage extremely well. It is a recording by the artist Shelby Lynne and her cover of the song ‘Willie and Laura Mae Jones’ written and composed by Tony Joe White. Taken from the Album ‘Just A Little Lovin’ recorded at Capitol Studios, Hollywood, California, USA, in January 2007. Produced by Phil Ramone and recorded and mixed by the Grammy Award winning Recording Engineer and Mixer, Al Schmitt. The reason for choosing this recording is to help the listener understand more about the Stereo Left, Centre, Right, Sound Stage and how it is created using the Pan control. 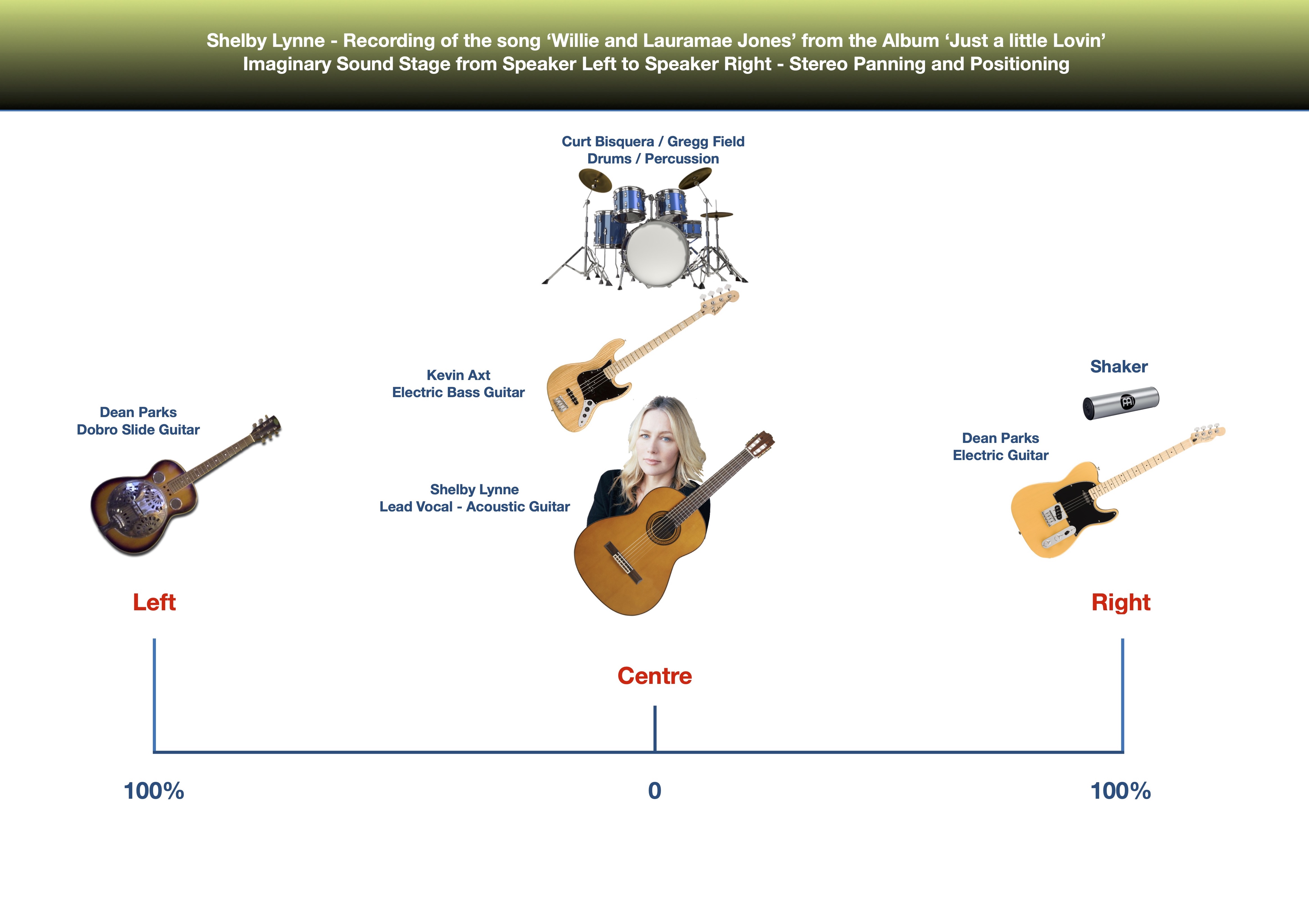 Mastered by Doug Sax and Robert Hadley at The Mastering Lab.

Were our neighbours a long time a back

They lived right down the road from us

They worked the land together

And we learned to count on each other

When you live off the land

You don't have time to think about another man's colour

Oh we’d sit out on the front porch

In the evening when the sun go down

Willie would play and Laura would sing

And the children would dance around

I'd bring over my guitar

And we'd play all thru the night

Every now and then

Old Willie would grin an say

“Hey, you play all right now”

And lord it made me feel so good

The cotton was high

And the corn was growing fine

Oh but that was another place another time

Listen to: Dean Parks Solo picking style on the Doboro Slide guitar panned Left leading into the percussive break at 2:28

2.33 - Listen to: Dean Parks solo picking style on the Doboro Slide Guitar panned Left plus his Electric Guitar panned Right at 2.33 and 2:43

The years rolled past our land

An they took back what they'd given

And we all knew we'd have to move

If we was gonna make a living

So we all took off

And went our separate ways,

It sure was hard to say goodbye

To Willie and Laura Mae

The years rolled by our door

And we heard from them no more

Till I saw Willie the other day

I said, “yawl stop by now

And maybe we can sit down and eat a bite 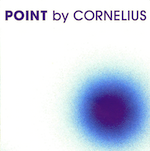 This instrumental track was recorded and mixed by Japanese musician, Keigo Oyamada, ‘Cornelius’ in 2002.

It is an amazing 3 mins 57 secs demonstration of Stereo panning and positioning.

Listen to the end to experience more of this detailed Stereo mix.

Note: All Images remain the copyright property of their respective owners